Brazos at Richmond:
The most recent forecast for Richmond continues to show the Brazos receding from a peak elevation of 54.81’. The most recent observation is 50.34’ at 2:15 pm indicating a drop of over 4’ since the peak and approximately 1’ over the last 24 hours. The latest forecast shows the Riverfalling below major flood level this evening and below minor flood level on Thursday. Upcoming forecasts should continue to be monitored for any significant changes. 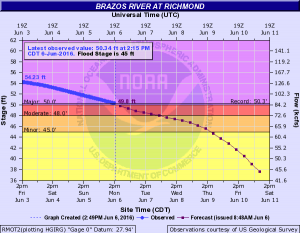 The elevation of the Brazos River has remained steady, if not slightly decreasing over the past few hours. It currently flows at an elevation of 54.66 with the last update recorded at 6:15 PM.

The District’s Operator continues to work inside the District and will continue frequent monitoring of the levee system. Even if the water level of the Brazos continues to slightly decrease, the County will still remain in a heightened flood alert because the water elevations are significantly above flood stage.

Trash collection was completed successfully with exception of Plantation Place, which was not serviced due to closure of FM 359. Trash collection will be collected on the next regularly scheduled day.

Please continue to exercise caution and continue to look for updates from the County and your District representatives.

As part of the on-going efforts to monitor the Brazos River by the Pecan Grove MUD Emergency Operations Team, we offer the following update on current conditions.

As of 7:00 AM this morning, the Brazos River – Richmond Gage had exceeded the previously recorded level.  The water at this location has been rising at a rate of approximately 1 foot per hour.  Gage reading at 7:00 was 50.56.

As of 10:15 this morning it was at 51.21.  The forecasted peak had been revised down slightly with the peak projected at elevation 53.4 tomorrow near noon.  This level would be close to the 50-year flood level on the Brazos River at this location.

Please note that the levee around Pecan Grove is designed to protect the subdivision from Brazos River levels with the Richmond Gage readings at a level of approximately 55 and will not overtop with levels as high as 58.

As water reaches this level outside the Pecan Grove Levee, water may be approaching FM 359 in several locations and areas around Pecan Grove may see backwater effects as the Brazos River rises to its peak. The Brazos River is currently overflowing into Oyster Creek to the north of Pecan Grove.

Please note that the Pecan Grove Stormwater Pump Stations, internal drainage systems and storage areas have capacity to handle almost 12-inches of rainfall internallywithout flooding of homes.  But as happens without the Brazos River flooding if the rate of rainfall exceeds 1 to 2 inches per hour, there is potential for street flooding.

Also, please avoid any “sight seeing” around the area to allow emergency personnel to perform their duties in keeping the community safe.

Heavy rains in the Brenham area over the last 24 hours will have the Brazos River water levels on the rise again. As a result Pecan Grove MUD and EDP will initiate Level 2 Emergency Levee Operations. EDP is conducting daily site inspections of the levee system and pump stations to confirm operation capability. The current prediction model from the National Weather Service indicates that the water level on the river at the Richmond gauge is above 35 feet and is expected to rise to 50.2 feet by midday Monday. If there is local rain fall, ponding water in the streets should be anticipated and is a normal part of the overall drainage and flood projection system. Please avoid driving through those areas and do not park your cars in your streets or driveways; cars should be housed in the garage to avoid rising water.

As always, please call EDP at our in district office if you have any questions, at 281-238-5000. We will continue to keep you posted.

Heavy rains in the area over the past several days have got the Brazos River water levels on the rise again. As a result Pecan Grove MUD and EDP have initiated Level 1 Emergency Levee Operations. In general terms this means that we have raised our level of communication and awareness about the Brazos River. EDP is conducting site inspections of the levee system and pump stations to confirm operation capability. The current prediction model from the National Weather Service indicates that the water level on the river at the Richmond gauge is above 38 feet and is expected to rise to 40.2 feet by midday tomorrow. After reaching its peak tomorrow, the river level is expected to rapid fall and be less than 35 feet by this weekend. As always, please call EDP at our in district office if you have any questions, at 281-238-5000.

Our Spring/Summer Newsletter is now available.

Topics featured in this newsletter:

Early voting dates are Monday, April 25, 2016 through May 3, 2016. The complete list of early voting dates, locations and hours for voting as well as election day voting locations, will be posted on the District website www.pecangrovemud.com. Fort Bend County utilizes Voting Centers on election day which allows voters to vote at any of the voting locations on Saturday, May 7, 2016.

For additional information on voting in Fort Bend County visit their website at http://www.fortbendcountytx.gov/index.aspx?page=338.

The Fort Bend County Sheriff’s Office is asking for your assistance with some parking issues in the neighborhood. When parking in the roadway, please be aware that an emergency vehicle may need to get through. Two vehicles parked directly across from one another will, in some cases, make it impossible for a fire truck or ambulance to pass. This will delay their response to a potentially life threatening event. When parking on the street please make sure your right tires are less than 18 inches from the curb. Please avoid parking directly across from another vehicle.

We have also had some complaints about residents parked in their driveway, blocking the sidewalk. When the sidewalk is blocked, pedestrians and children on bicycles are forced into the street. Please be considerate and pull your vehicle up your driveway to clear the sidewalk.